THE ROLE OF THE DIASPORA AS LEVER OF DEVELOPMENT IN AFRICA Generally when I happen to have conversations with friends on the African continent, the first thing I hear is often "nothing goes here ... leaving is the solution"

Two years ago, at a political reception, the former German Finance Minister, currently President of the German Bundestag, announced to parliamentarians that the future of Europe was being played out in Africa. At the time, there was a certain annoyance of the present public. The migratory crisis with the arrival of more than one million refugees in Germany had reached its paroxysme. In the end, several political friends had called me to get my opinion. Personally, I had mentioned the role that the Diaspora could play and which until now constituted a missing link in the development of Africa. No country has developed on the basis of foreign expertise and without taking into account its Diaspora.

Africa, eternal assisted and the vicious circle of poverty

50 years after independence the African continent is still aided eternal. Every year, hundreds of billions of dollars from developed countries are allocated to African countries to help development. Nevertheless, in many of these states, there is still a great poverty pushing African youth to immigration. Why has development aid so far led to such unsatisfactory development? The argument of some economic analysts that today's poor developing countries will inevitably remain as poor in the future, given the low income that can not save money and thus make the investments necessary for economic growth, are not tenable. How else can we explain that the developed countries, which in the beginning with a low standard of living have had a "take-off" without the help of other countries, and why there are a number of developing countries that have done so well? gone out without help, sometimes even in opposition to international institutions (IMF, World Bank etc.)? The example of South Korea and Taiwan) today "emerging countries" by their economic growth is an illustration.

The limits of development aid

The economic progress of a country may be due to development aid but in the end it is only through their own efforts that countries reach their development. The economic development of a country depends on a number of circumstances (eg political system, resource reserves, climatic conditions, willingness to work of the population, enforceability of legal and organizational conditions ....) In the past, the underdeveloped states have developed themselves into today's developed states. From then on, it is necessary for Africa to find pragmatic solutions.

The role of entrepreneurship

The comparative advantage of developed countries (without raw materials like Africa) today is knowledge, know-how and entrepreneurship. More than 80% of jobs in Germany, the  leading European power are created by small and medium-sized enterprises and not in the public sector.

The argument often heard that in many African countries a Western-style entrepreneurial class or the desire to generate income by their own efforts would be lacking seems a priori legitimate. Asia's new economies have been created by millions of bottom-up entrepreneurs, mostly from their diaspora. Governments have moved further and further away.

However, it turns out that the social and legal conditions created in the countries concerned in Africa in the field of entrepreneurship pose a problem. Generally, it is the framework, political and legal conditions and not the motivations of individuals that limit the activities of the private sector. The African Diaspora can serve as leverage on the path to an African renaissance. 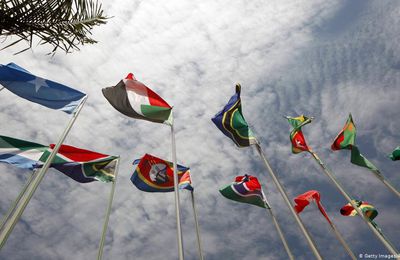